Who was behind last year’s attack on Alberni University lecturers? 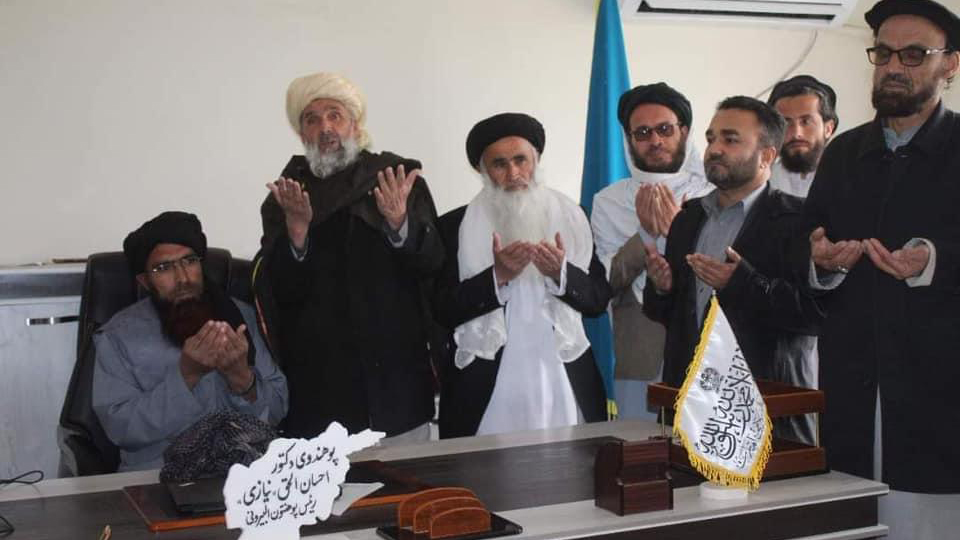 Ehsan-Ul-Haq Niazi on the first day of taking his office as the chancellor of Alberoni University. Feb. 2022.

Multiple sources have confirmed that Ihsan-Ul-Haq Niazi, the Taliban-appointed chancellor for Alberuni University in Kapisa, has been involved in a series of subversive activities, including a bomb blast that targeted a vehicle carrying lecturers and students from the same university last May, killing at least four people.

Niazi was appointed to the post on February 22, 2022, but he formerly was a lecturer at the Sharia Law Faculty of Alberoni University.

The attack happened in Bagram district, Parwan province, on May 29, 2021, by a remote-controlled explosive device that targeted a minibus carrying Alberoni University students and lecturers, killing at least four, including two university lecturers, and wounding 17 others.

Noor Ahmad Ahmadi, a lecturer in the Education Faculty, and Maiwand Farooq, a lecturer at the Faculty of Medicine at the university were among those killed in the attack.

Amu spoke with multiple sources, including two former government officials, an independent source and an employee of the university, to prepare this story.

The official said that one person involved in the attack known as Nasab Khan, who was a Taliban member, was killed in an operation by a special force unit under the former government.

One source said that based on evidence collected by the former government’s intelligence agency, Niazi was not only involved in the targeted attack on Alberoni lecturers but also was “directly involved in many attacks against civilians and the former military personnel, including roadside bomb blasts.”

“This issue was investigated by the police headquarters of Parwan many times, but unfortunately, the presence of corrupt officials in the leadership did not follow such cases and did not hold responsible people like him for being a religious scholar, despite that they had evidence against them,” the source said.

Amu also spoke with an employee of Alberoni University who was wounded in the May 2021 attack on a minibus they were traveling in.

“We were on the way when we were targeted by a roadside bomb blast in Bagram district, which was the residence of Niazi,” he said. “Some of the teachers were martyred and some were wounded, like me.”

Meanwhile, the Taliban-appointed chancellor for Alberoni University is accused of awarding all key posts to people from one ethnic group.

Khalili, a former lecturer at Alberoni University, Niazi has a radical and discriminative approach towards issues at the university and that soon he will change the college into a hub for people like him.

Amu reached Mr. Niazi to have his comments on the allegations, but he said he is not allowed to speak. “I will not speak without an order from the ministry,” he said. He did not respond to Amu reporter’s calls afterward.