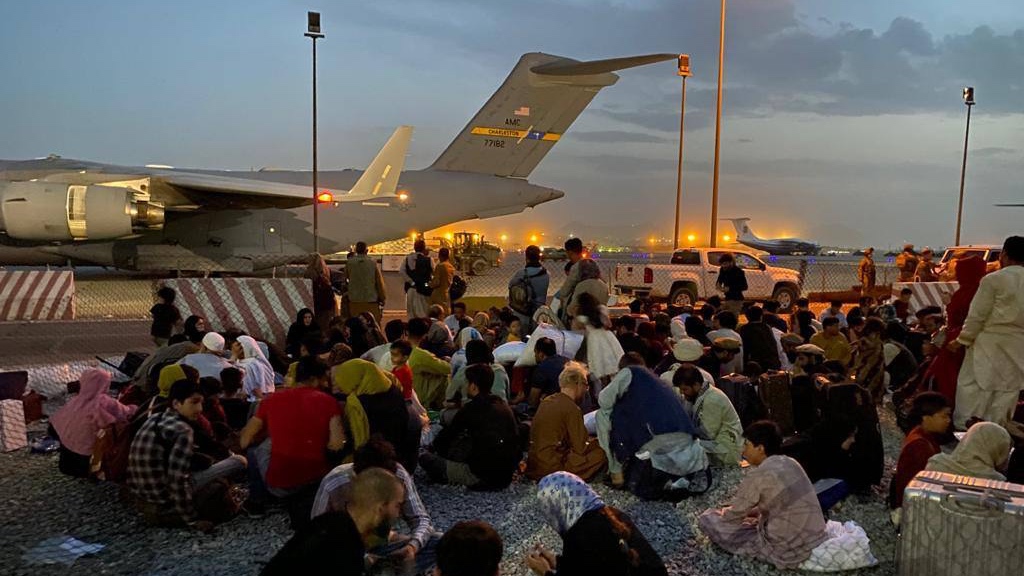 A group of Afghans waiting for their flight at Kabul airport in August 2021 during the evacuation process. Photo: Shakibi Ibrahimi

On July 30, the World Day against Trafficking in Persons, Afghan migrants shared their bitter stories of a troubling journey from Afghanistan to the neighboring countries and then to Europe.

Many of those interviewed by Amu said they almost died on this journey, which they took after a blind trust in “human traffickers.”

‘I was injured on the way‘

“I was injured on the way,” Qadir Sultani, 28, said, adding that he left Afghanistan after the fall of the previous government to resettle in Europe, but on the way, he was injured after Iranian border forces, opened fire on the border areas between Iran and Turkey.

“We paid at least 650 dollars each to the Iranian police on the border with Turkey, but when we moved forward, the police stopped our car, but we didn’t stop, and they opened fire on us, and my right leg was injured,” Sultani said.

This is not the only incident that happened to Sultani during this journey. He says the whole journey has been hopeless for him and his friends.

He said Iranian border forces arrested him and his friends and kept them in custody for 20 days.

“We were taken to Tehran after 20 days. When the doctor saw my leg, he told me that I should have visited him earlier,” Sultani said.

Sultani was deported to Afghanistan through Islam Qala City in Herat. He said that he feels better now after his wound has healed and that he will soon resume a similar journey to Europe.

Bahram, 23, from Panjshir province, left Afghanistan for Turkey with 100 more people, heading towards Germany as their final destination.
Bahram said his assumption of human traffickers ahead of their troubling journey was that they were “good people,” but later he realized the fact that there was no commitment towards their safety and no value to the lives of migrants.

“The trafficker is one person. He does not stay until the last phases of the journey. I paid $1,200 to him. They have other connections. They handed us over to others. No one pays attention to you on this journey,” he said.

Insecurity and lack of jobs were the two main reasons for which the migrants said they decided to leave the country.

Two other migrants said that even after reaching Europe, they were not receiving what they had expected and were treated differently compared with migrants and refugees from other countries.

Parwiz Ahmad, an Afghan migrant, says he has been deported from Greece and has migrated to Turkey, where he lives hidden from the police.

“I work in a factory, but we are not counted as humans here. I don’t have any other option,” he said.

Migrations from Afghanistan increased following the withdrawal of US and coalition forces as well as the fall of the previous government last August.