Afghanistan Chamber of Commerce and Investments (ACCI) officials said Sunday that hundreds of containers loaded with commercial goods, including food items, are stranded at Torkham port due to transportation challenges created by the Taliban.

According to the ACCI, the Taliban has “monopolized” the transportation process of commercial goods and raised taxes, resulting in a build-up of containers at the Nangarhar border crossing.

The ACCI said traders used to pay 10,000 AFN to transport a container from Torkham to the provincial capital of Jalalabad. But now Taliban officials demand 25,000 AFN for each container, which is having a considerable financial impact on traders.

Transporters said they now have to get a number and wait their turn to leave the port. Khogyani said: “We don’t want numbers, we want competitive free transportation so that the public gets the benefits.”

Shirmal Atmanzai, the representative of the truck station in Torkham, called on the Taliban to resolve the issue as soon as possible, stating: “We used to arrange the fee with the driver, now brokers tell us to rent a truck from them and they don’t let us get a truck directly from the market. The brokers are charging double the regular rent.”

This comes amid escalating food prices in the country, which traders say will be compounded by the problems at Torkham.

Zalmay Azimi, a board member of ACCI, stated: “Hundreds of containers are stranded in Torkham. These containers are loaded with raw materials and other goods. Before the traders used cranes to load their containers onto other trucks and were responsible for this, now the Emirate (Taliban) has come to take responsibility for the cranes and transportation. Previously, we used to pay 10,000 Afghanis for the process, and now it has increased to 25,000 Afghanis, and we urge the Taliban to solve this problem.”

Imamuddin Ahmadi, a spokesman for the Taliban-run ministry of transportation and aviation, denied charging 25,000 Afghani for each container, stating the fare for transporting goods from Torkham to Jalalabad city in Nangarhar Province was 12,000 Afghani.

“We don’t allow Pakistani vehicles [in the market] and this has an effect on the prices [of transportation], and the fare for transporting goods from Torkham to Jalalabad may be increased up to 12,000 thousand Afghanis, not higher than that. We have prepared the principles and the bill, and the trucks are allowed in order and by number. Of course, [only] trucks that have a license, not just any vehicle,” Ahmadi added. 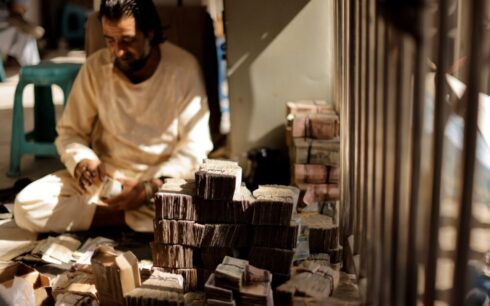 Afghani weakens against US dollar after UN suspends cash shipments