Restrictions imposed on women for visiting Blue Mosque in Balkh 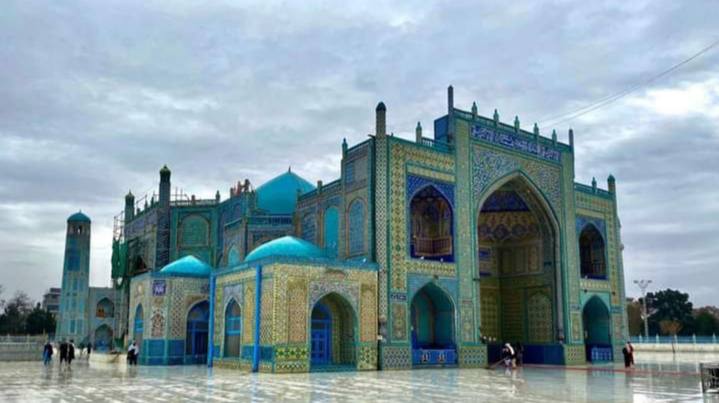 A bunch of new restrictions have been imposed on women’s presence at the Blue Mosque in Mazar-e-Sharif city in northern Balkh province where the historical and religious site is located, something that has not happened before in the country.

Based on a new rule imposed by the Taliban, women will be allowed to visit the Blue Mosque once a week while they have been banned from visiting the shrine on other days of the week.

Another restriction includes the full covering of body or wearing a burqa; otherwise, women will not be allowed to enter the Blue Mosque, women said.

“We have proper dress. We wear mask. Our dresses are long. We have not put on make up, but despite that, we are not allowed to visit the shrine,” two women from Balkh told Amu.

Announcements installed on the entrance gates of the Blue Mosque by the Taliban read that “sisters and mothers can only visit on Monsays while they must have the Islamic hijab, covering their faces.”

The mosque is often visited by a large number of people, including women, from all over the country, especially Balkh and its neighboring provinces, where they also take photos and do prayers.

Another announcement by the Taliban reads that “men and women are not allowed to take photos (at the mosque) or take camera and phone with them.”

Two women said on condition of anonimity that women are faced witg “harsh treatment” by Taliban members when they visit the mosque on the specified day.

“We do not feel confortable even on the day that has been allocated for us,” one woman said. “We wear long dresses but we have no option but to visit many gates so that we can enter the shrine.”

“The Taliban members who are at the gate always insult women without any reason. They make us hopeless about life,” the woman said.

Other women claimed that in some cases, they have witnessed that women have been “beaten up” by the Taliban.

“I saw that Talibs were beating the women who did not cover their faces and wanted to enter the Rawza (the Blue Mosque),” said Fatima, a Balkh resident.

“I saw that a Talib was beating the girls who even had mask and Islamic dresses to keep them away (from the gate),” said Bibi Gul, a Balkh resident.

Taliban has imposed many restrictions on women over the past year under its rule in Afghanistan. The group has seperated classes for male and female students at universities, has banned girls from secondary schooling and has asked women to wear mask if they appear on TV.

Activists said that the Taliban is trying to supress women by imposing such rules.