One year under Taliban rule: 66 civilians killed in Baghlan 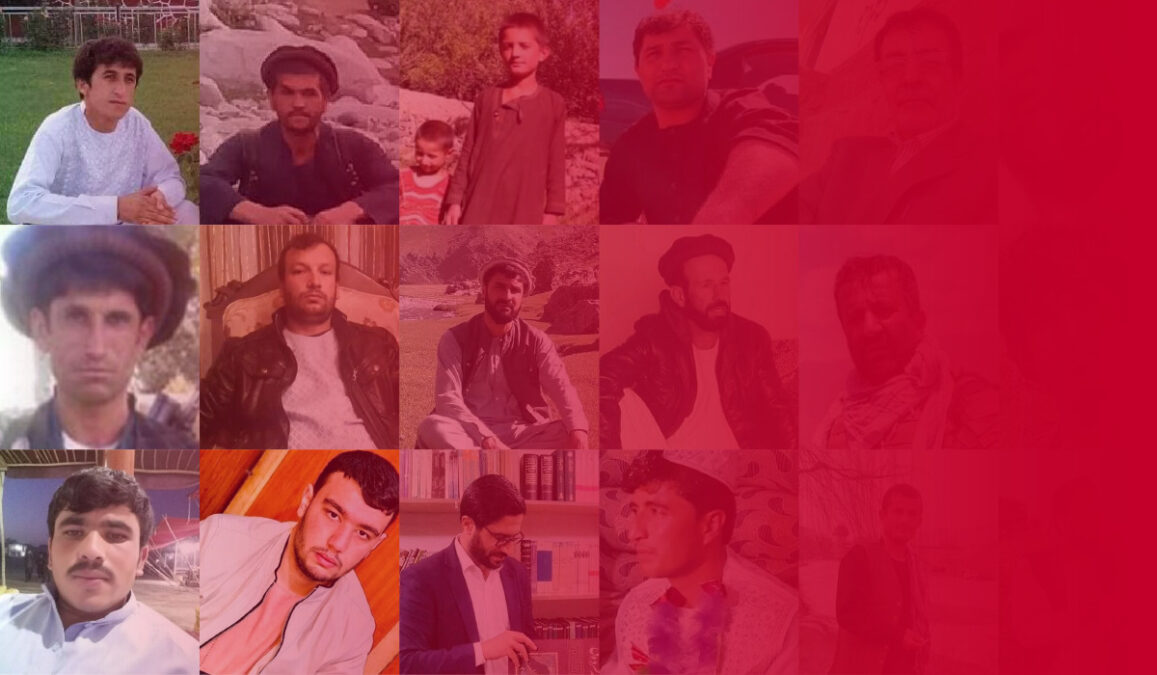 Information from various sources reveals that at least 66 residents of three districts of Baghlan, all known as the Andarab valley, were killed “by the Taliban” over the span of nearly 10 months.

Amu spoke to more than 10 sources from Banu, Deh Salah and Pul-e-Hisar districts in Baghlan to confirm the information.

The killings have happened from the start of the Taliban rule last August and have continued until recent months, according to sources, who say at least 30 of these civilians were killed in the first three months of the Taliban’s capturing of the Andarab region.

His relatives blamed the Taliban for the killings. Sources said Dr. Zaheeruddin had no links with any side of the conflict.

The youngest victim of this incident was 2-year-old Shakira.

In another case, a Baghlan resident, Mohammad Hasan Andarabi, said five residents of Rasheedi village in the Dara-e-Qasan area whose names were Sayed Agha, Noorullah, Dr. Khan Shirin, Sayed Daud, and Sayed Hakim, “were killed by the Taliban.”

Andarabi said that Rahimullah, 40, who had eight children was on the way to Pul-e-Khumri city, the center of Baghlan, for treatment, when he was stopped by the Taliban in Dahan-e-Bajgah area in Baghlan and was killed.

A resident of Dara-e-Kishin Abad village in Baghlan said that six residents of Andarab valley, whose names were Basir, Iftekhar Ali, Halal Ahmad, Mohammad Warid, Baba Jan and Amruddin, who were all civilians, “were killed by the Taliban.”

A resident of the Deh Salah district said that Shahab, 31, who had gotten married newly, was taken out of his home in an evening on Nov. 2, 2021, and was killed in front of his wife.

The resident of the district said that Shahab’s newly born baby, Noor Rahman, was born after his mother saw her husband being killed in front of her.

Another source in the Banu district said that his brother was arrested by the Taliban when he was farming his land, and then he was taken to an area and was killed. He said that the Taliban did not allow him to bury his brother, but finally, they did this with the help of elders in the area.

The source said that his brother was 25 years old, and was single. The incident happened on August 27, 2021. He said his brother had no links with any sides of the conflict. He requested not to be named in this report over the fear of revenge by the Taliban.

In another incident, five residents of Dara-e-Qasan area, including Abdullah Hashim, Gul Mohammad, Noorullah, Mohammad Jawed and Zakir, were killed on May 9, 2022, by the Taliban near their house.

Local residents said the Taliban had taken the five people out of their homes in retaliation to an attack on their vehicle in the same year earlier that day. They said the victims had no links with any side of the conflict and were civilians.

A resident of Arzangan village in Deh Salah district said a five-member family were killed in their home by the Taliban on Nov. 2, 2021. One of those killed was a man, remaining four were women and children, the source said.

The eldest victim of the killings was Zia Mohammad, 75, a resident of Fij village in Banu district. Two members of his family confirmed the details to Amu.

“He was old and had no links with any group,” a family member of Zia Mohammad said. “He was stopped in a Taliban check post on Oct. 26, 2021, and was shot dead.”

One incident happened on August 30, 2021, in which Paiman, 22, was stopped in a check post between Andarab and Khinjan areas and was shot dead, a resident of the Khinjan district said.

Another killing happened in Kishin Abad village in Banu district of Fawad Andarabi, a folk music singer. The incident had an international reaction. The Taliban killed him in August after taking him out of his house, said Mustafa Noori, a resident of Banu district.

Hijran, 18, was another victim. One of his relatives said Hijran and his cousin, Paiman, “were killed by the Taliban” on Aug. 21. Paiman was the only breadwinner of a seven-member family.

Shamsullah, 18, was arrested “by the Taliban” on June 19 and his body was found in the area the next day, said Gul Ahmad, a resident of the Dara-e-Qasan area. His body was taken to the center of Deh Salah district as a protest, he said, adding that the Taliban had abused his body after killing him, an incident that led to a clash between “Tajik and Pashtun Taliban.”

Amu spoke with the family members of 12 other victims, who confirmed the killings, but they could not speak about the identities of those killed due to the fear of revenge by the Taliban.

An attempt to stop “resistance”

Saud Bakhtiar, a tribal elder in Adarab valley, said the Taliban wants to prevent the armed resistance against them by such killings.

He said that at least 70 families were forced to leave their homes in the three districts, including 40 families in Pul-e-Hisar, and the remaining in Banu and Deh Salah.

Taliban deputy spokesman Bilal Akbari rejected the allegations, saying, “Our forces are the protectors of people’s safety and are making efforts to better ensure people’s safety.”

He added that in some cases, civilians are harmed, but such cases are followed by “official addresses.”

The roots of opposition to the Taliban

The valley shares a border with Khost Wa Frink district in Baghlan and Panjshir province, the two areas that have been the base for armed oppositions against the Taliban.

Following the fall of Kabul on August 15 to the Taliban, Andarab became one of the two hubs for the national resistance front (NRF) besides Panjshir led by Ahmad Massoud.

Media reports indicate the NRF forces have had a presence in the three districts in the valley. Intense clashes in the area pushed key Taliban members, including their defense minister Mullah Yaqub and chief of staff Qari Fasihuddin to travel to the area.

This comes as the UN in a report on July 20 accused the Taliban of committing extrajudicial killings in Afghanistan in a period of 10 months of their rule in Afghanistan.