Envoys from US, 20 other countries to attend Tashkent meeting 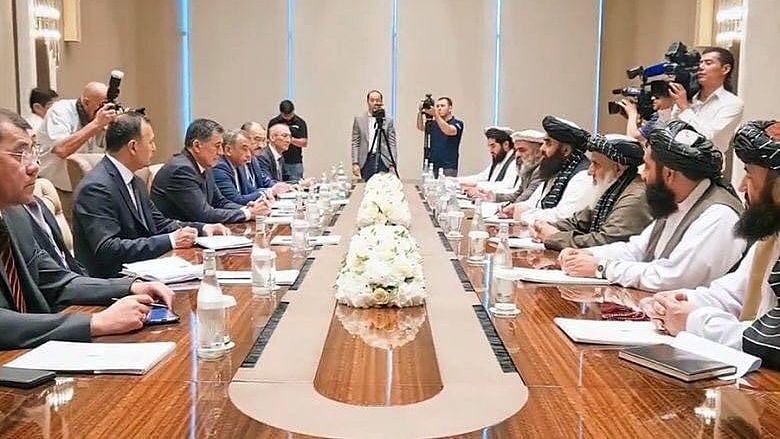 Taliban delegation in a meeting with Uzbek officials in Tashkent, July 25, 2022. Photo: MFA.

Special envoys of the United States for Afghanistan, Thomas West and Rina Amiri, will attend the Uzbekistan conference where representatives of at least 20 countries will discuss Afghanistan, with a primary focus on economic projects.

The US said the international community is committed to a stable, peaceful, and inclusive Afghanistan that respects all Afghans’ human rights and fundamental freedoms.

Uzbekistan’s Ministry of Foreign Affairs said the meeting is aimed at promoting literacy, security and reconstruction in Afghanistan and rejoining Afghanistan in regional cooperation processes.

The meeting was initially planned to start on Monday, July 25, but it was delayed one day. Issues around Afghanistan’s economy and politics will be discussed at the conference.

Representatives of the US, Russia, EU, China, Britain, Japan, Iran, Pakistan and other Asian countries will attend the conference to discuss the formation of an inclusive government, girls’ access to education, women’s access to the right to work, and a recall on the international community to increase its assistance to the Afghan people.

Sources said the meetings are aimed at lobbying for the recognition of the Taliban government.

“Uzbekistan has good relations with its neighbors and is trying to create a coordination to prevent the continuation of political and security crisis because, if continued, it will damage political stability in Uzbekistan and other countries in Central Asia,” said Mahdi Afzali, an analyst in international affairs.

No country has so far recognized the Taliban government. However, some countries, including Pakistan, Iran, China, Russia and Turkey and some Central Asian countries have maintained their diplomatic ties with the Taliban.