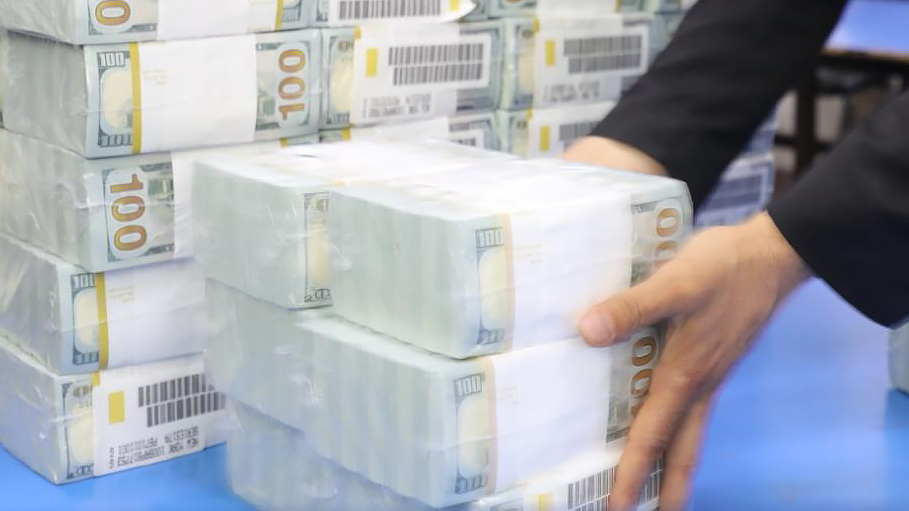 More than $1.7 billion cash in humanitarian assistance has been delivered to Afghanistan since the Taliban seized power in August last year.

In just three months, $640 million has been received, central bank statistics reveal. In addition, a graph of cash for aid in Afghanistan, seen by Amu TV, shows an increase.

However, questions are starting to be raised over where the money is coming from and how it is being spent. While reporting the arrival of cash, and providing photographs of what is believed to be the cash, which is always covered in plastic, the Taliban reveal very few details.

A number of economic experts have said that the ongoing injection of hard cash, in such large amounts, is questionable and could be for intelligence purposes.

The Taliban-controlled central bank make a point of announcing the arrival of shipments of cash on their Twitter page that according to them are earmarked for humanitarian assistance.

Amu TV reviewed the bank’s Twitter account and found that Afghanistan received $120 million in cash in September of this year, $200 million in October, $240 million in November, and $80 million in the first week of December this year – all of which was reported by the bank as arriving in batches of $40 million.

If this is indeed cash donated by the international community for humanitarian purposes, then it appears to show a steady increase in foreign donations after the Taliban leader issued a decree imposing strict Sharia law – which allows for public executions, flogging, amputation and stoning of women.

According to the Taliban-controlled central bank, immediately after arriving in the country, the cash shipments are handed over to AIB Bank, a private bank in the country.

Following the arrival of last week’s humanitarian cash aid package, the central bank said it was grateful for the international community’s cash assistance.

“Da Afghanistan Bank appreciates any principled action that brings currency into the country and helps the vulnerable people in the society, and continues its efforts to strengthen the banking sector as much as possible,” the bank said.

However, economic experts say this process is questionable and that despite all the cash received, the high poverty levels have not been reduced.

One economist, Sayed Masoud, said: “One of the most secret things is the $1.8 billion dollars in cash and the $2.8 billion that the United Nations claims to have provided for Afghanistan, yet we still haven’t been able to alleviate poverty and even to stop poverty. There are several factors associated with it.”

Masoud said in his opinion, the cash aid to Afghanistan is for political and intelligence purposes as there is no proof as to how the cash is being spent.

“Secondly, there are no checks and controls in place for this [cash] aid. When there is no control or monitors, indeed, there is no accountability in this regard,” Masoud said.

Sources also told Amu TV that there has been an increase in US dollars in circulation among money exchangers at Afghanistan’s Sarai Shahzada money market.

Abdul Rahman Zirak, the spokesman for the exchange union at Sarai Shahzada in Kabul, said that the flow of US dollars in the market has increased. He said this has resulted in a more stable local currency, the afghani.

“I am delighted to say that recently, the value of the Afghani is commendable compared to other currencies and has been kept stable. The main reason for this is that humanitarian [cash] aid is coming. A lot of US dollars are available in the market. On the other hand, the central bank auctions 10 to 17 million dollars per week,” Zirak said.

Shah Mohammad Mehrabi, a member of the Swiss-based Afghanistan Trust Fund, visited Kabul for the first time on December 6 and participated in a two-day meeting of the Supreme Council of the Taliban-controlled central bank. He discussed monetary policies and improvements in the Afghanistan banking system with the bank officials.

No details have been shared regarding this meeting.

The United Nations Security Council (UNSC) has recently approved the resolution to send humanitarian aid to the countries under the UNSC’s sanctions.

Syria, Myanmar, and Afghanistan were among the countries that will benefit from the provisions of the new resolution and the humanitarian aid process of the international community.

John Sopko, Special Inspector General for Afghanistan Reconstruction (SIGAR) also reported that the US still remains the largest donor to Afghanistan. He said that the US has provided Afghanistan with more than $1.1 billion in assistance following the fall of the republic.

Sopko has however criticized Washington for not explaining how the cash assistance to Afghanistan is being used.