‘One of the biggest shocks in World Cup history’: Saudi Arabia beats Argentina 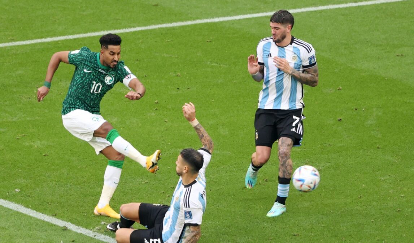 The entire football community was left stunned on Tuesday after Argentina suffered one of the biggest shocks in World Cup history when they lost 2-1 to Saudi Arabia at the Lusail Stadium in Qatar on Tuesday.

Captain Lionel Messi led his team to an early start from a penalty shot but Saudi Arabia fought back and equalized three minutes after half-time. Five minutes later a stunning strike from Salem Al-Dawsari left Argentina helpless despite relentless attacks in the second half.

Argentina went into the match as one of the favorites to win this year’s FIFA World Cup tournament and were unbeaten in 36 matches. Saudi Arabia however ended this run, leaving an entire football world shocked.

Even FIFA posted to their Twitter page, saying “One of the biggest shocks in #FIFAWorldCup history”.

The momentous win over one of the favorites for the tournament, was cheered loudly by hundreds of Saudi fans watching the game via big screen in Mrsool Park stadium in Riyadh.

Similar scenes of jubilation were posted across social media platforms as Saudis uploaded videos of their celebratory cries when the final whistle went.

Saudi Arabia’s King Salman meanwhile issued a directive on Tuesday that Wednesday, Nov. 23, will be a holiday for all employees in the entire government and private sectors, as well as for students in all phases of education.

According to a statement, this was to “celebrate the joyous occasion of the stunning victory of the Saudi national team against Argentina in their opening game of FIFA World Cup 2022 Qatar”.