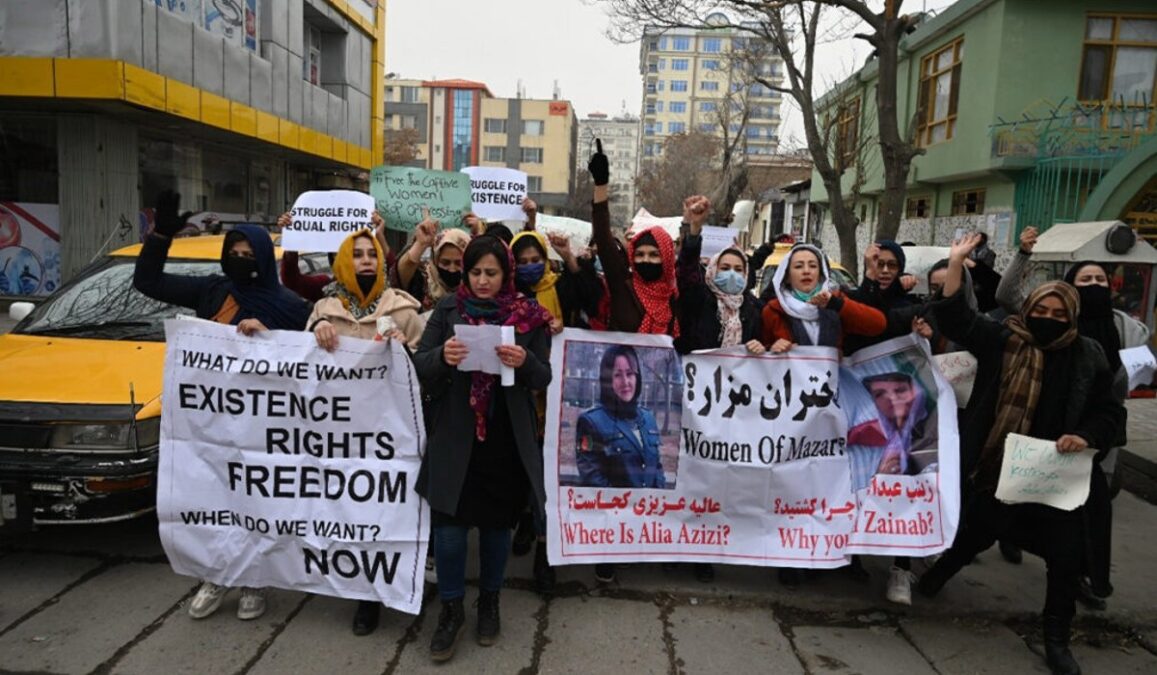 Afghan women attend a rally in Kabul on January 16, 2022, to protest the killing of former policewomen by Taliban.

At least 50 women from Afghanistan signed a petition on Tuesday to protest “the absence of their voice” at the 77th session of the United Nations General Assembly, saying the situation has worsened for women in the country.

The General Assembly takes place every year, bringing world leaders, civil society, academia, and the private sector together to find solutions for the world’s most pressing problems.

The women said that Afghanistan is experiencing the collapse of its economy, unprecedented levels of food insecurity and a human right, specifically women’s rights crisis, unlike any other in the world.

As women in Afghanistan are grappling with “the world’s gravest women’s rights crisis,” they are alone, the women said in a statement.

At the 77th edition of the General Assembly, taking place September 13 to 27 in New York, the priorities, voices, and perspectives of Afghan women are largely missing, the women said.

They said that it means in practice that no Afghan woman is represented at the UNGA this year and that the UN and the world are turning a blind eye to the world’s worst human rights crisis, which calls into question the commitment to standing up for human rights globally.

The lack of attention to the rights of Afghan women and girls undermines the very foundation of the Universal Declaration of Human Rights that entitles everyone to equal protection against any form of discrimination, the women said in a statement.

Statements of concern and verbal commitments to women’s rights in Afghanistan are not enough anymore when it does not come with any action, the women said.

Since 15 August 2021, around 40 decrees have been issued by the Taliban regulating women’s bodies, attire, and movement, stripping them of their basic human rights and liberties.

Women have no right to political participation, girls are banned from attending school past the sixth grade, and women are barred from working most jobs outside the home, the statement said.

Women are also banned from traveling long distances without a male companion and are increasingly being denied access to essential services.

All laws protecting women, including the law on ending violence against women, are suspended and women have lost every means of access to justice.

After the fall of Kabul, women in Afghanistan have held many protests to voice their opposition to the Taliban. Women protestors faced arbitrary arrests, torture and even death in their brave actions and resistance, the statement said.

“We appeal to the United Nations and the Security Council to hold high-level meetings to discuss the situation in Afghanistan for what it is: Gender Apartheid,” the women asked. “A standalone resolution on labeling Taliban’s regime as Gender Apartheid can effectively keep women of Afghanistan a priority globally.”