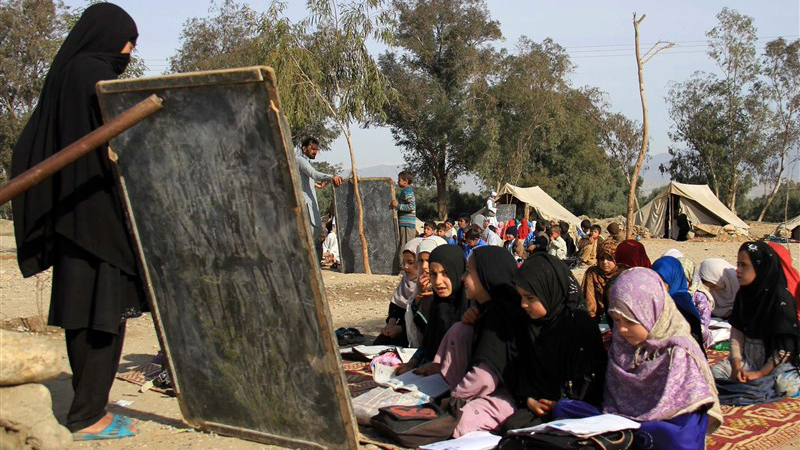 On the anniversary of the ban on schooling for girls in Afghanistan, a group of 50 Afghan schoolgirls in an open letter to the world leaders expressed their disappointment in the lost opportunity of being away from schools over the past year and asked them to speak up against “this injustice.”

“We wish to wear our black dress and white veils again and return to school as boys do,” the girls said in the letter. “Our fingers dearly miss our pens and notebooks. We want to repeat after our teachers out loud, inside classrooms.”

They asked the people of Afghanistan, the United Nations, and world leaders to speak against “this injustice and inequity.”

“We ask everyone to stand beside us until the right to access quality, equal, and inclusive education is fulfilled and assured, according to globally acknowledged standards,” the girls said.

They said the world must meet its obligations and not allow Afghanistan to become a haven for terrorists again.

“We will never forgive and forget if the world fails us today. We will rise and stand firm again, but the world will stand ashamed before us,” the girls stated.

The girls said they would make history and narrate how they lived through a chronicle of darkness, saying the world should stand by them and raise their voices together, so the schools reopen.

The schoolgirls asked the international community and the UN to avoid recognizing the Taliban and instead impose more sanctions on them unless they allow all girls to attend schools and guarantee equal rights and freedom of work and participation in social affairs.

In a message on the anniversary of the closure of secondary schools for girls in Afghanistan, UN chief Antonio Guterres called on the Taliban to let Afghan girls back to school.

Guterres said that the last year was a year of lost opportunity for girls that they will never get back.

In a statement on Sunday, Sept. 18, the UN office in Afghanistan called on the Taliban to take urgent measures to reopen the secondary schools for girls.

Figures by the UN show that at least one million girls have been deprived of education over the past year after the Taliban decided not to allow them to attend their classes.