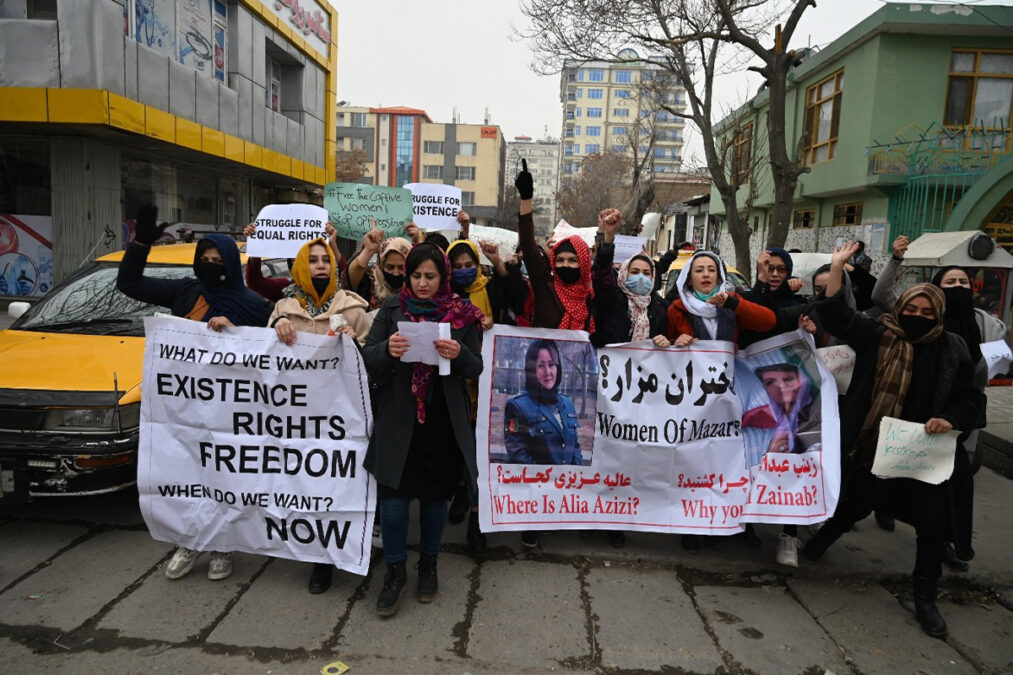 Afghan women attend a rally in Kabul on January 16, 2022, to protest the killing of former policewomen by Taliban.

A group of human rights experts from the United Nations at a conference in Geneva, Switzerland, on Monday expressed grave concerns over violations of human rights in Afghanistan, warning that the country’s future is bleak if more is not done to reverse the deteriorating human rights situation, particularly for women and girls.

In a joint statement, the experts reiterated their call on the international community to take stringent actions to protect Afghans from human rights violations, including arbitrary detentions, summary executions, internal displacement, and unlawful restrictions on their human rights.

The experts said they the Taliban has not only failed to deliver on their promises but has also reversed much of the progress made in the past two decades.

They also said that humanitarian and economic crisis has worsened partly due to the interruption of international development assistance and the freezing of Afghan assets abroad.

The experts said a plethora of human rights violations have been committed by the Taliban since last August, recalling the “virtual erasure and systematic oppression of women and girls from society.”

“Nowhere else in the world has there been as wide-spread, systematic and all-encompassing attack on the rights of women and girls – every aspect of their lives is being restricted under the guise of morality and through the instrumentalization of religion,” they added.

They said that discrimination and violence cannot be justified on any ground.

“Regrettably, there is little or no sign that the human rights situation is turning a corner,” the UN experts said in the statement, recalling daily reports of violence, including extra-judicial killings, disappearances, arbitrary detention, torture, heightened risks of exploitation faced by women and girls including for the purposes of child and forced marriage, and a breakdown in the rule of law.

The abolition of independent oversight mechanisms and institutions that protect human rights, especially the Afghanistan Independent Human Rights Commission, leaving Afghans with no avenue for redress, the experts said.

They stated that the administration of justice has been compromised, with the applicable law unclear and judges and other judicial officials replaced, especially affecting women.

The UN experts said press freedom has been suppressed with access to information curtailed.

Journalists, human rights defenders and civil rights activists have either left the country or quit their activities altogether and gone into hiding. Many educators, academics and artists have been forced to do the same, they added.

Attacks on religious and ethnic minorities, some of them claimed by Daesh, have also flared up, emboldened by the inability or unwillingness of the Taliban to protect them and ongoing discrimination, the experts said.

They added that places of worship, schools and vehicles have repeatedly been attacked.

In the absence of an inclusive and representative government, the prospects for long-lasting peace, reconciliation and stability will remain minimal, they said.

“We reiterate our call to the Taliban to abide by their international obligations under international treaties, to which Afghanistan is a State party,” the UN Experts said.

“The future is immensely bleak for Afghans if more is not done by the international community to ensure the Taliban changes its modus operandi and complies with its human rights obligations,” the exports said.

They added that the Taliban seek international recognition and legitimacy, but, regrettably, they continue to abuse almost all human rights standards while refusing to offer even a modicum of respect for ordinary Afghans, in particular women and girls.

“Most recently, we have witnessed that the Taliban appear to have been harbouring the leader of Al Qaeda. That said, the recent US drone strike also raises concerns of a violation of international law,” the experts said.

They added that the Taliban should not be on a path to recognition unless it demonstrates significant steps towards respecting human rights including by immediately reopening girls’ secondary schools and restoring their access to a quality education.

The exports made some recommendations to the Taliban, asking them to:

Abide by all international human rights and humanitarian law obligations and commitments incumbent upon Afghanistan;

Immediately open all secondary schools for girls and restore their access to a quality education;

Respect the general amnesty and immediately stop all reprisals against members of the former government’s security forces, other officials and civil society, especially human rights defenders, including women;

And immediately reinstate the Afghanistan Independent Human Rights Commission, the bar associations, and other relevant unions, and allow them to operate freely and independently.

They also asked the international community to ensure that civilians have equitable access to humanitarian aid, support the mandate of the Special Rapporteur on Afghanistan, support the ongoing initiatives of Afghan women leaders and thinkers and adopt measures that would pave the way for Afghanistan’s economy to recover.

Taliban rejected findings of the UN experts on human rights violations in Afghanistan.

Taliban spokesman Zabihullah Mujahid said that over the past year, thousands of people have been forgiven who fought against them under the foreigners’ support for two decades.

He condemned the UN report and called it regrettable.