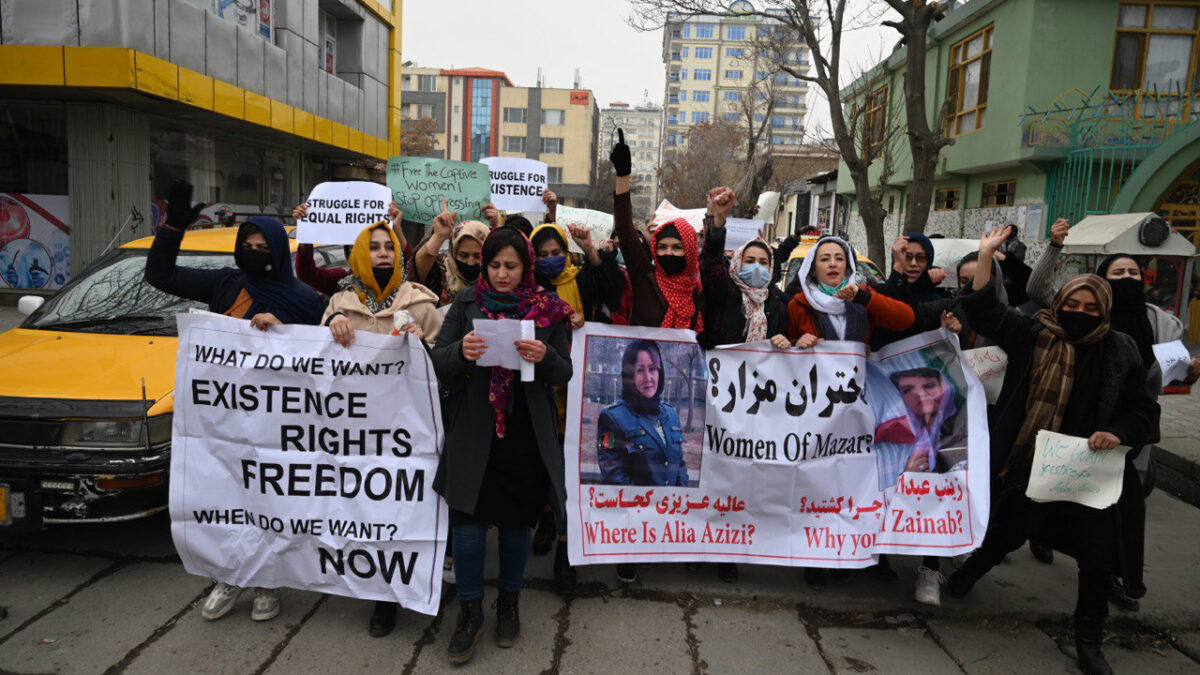 Afghan women during a protest in Kabul in January 2022.

An online campaign has started by Amnesty International with the aim to stop a roll back on human rights in Afghanistan as the country witnesses severe violations in this regard under the Taliban rule since last August.

The watchdog says the Taliban has started a new era of human rights abuse and violations since taking over on 15 August 2021 in Afghanistan and that one year later, the country is at the brink of irreversible ruin.

The international rights organization has documented human rights violations by the Taliban and is expected to release a report on this in the near future as researcher Samira Hamidi explained on Wednesday.

“Our findings show that the Taliban has committed clear violations of human rights,” she said. “The group has no accountability and system to end violation of human rights.”

Hamidi added that by collecting the signatures until the end of December, they hope “to bring more pressure on the Taliban to stop human rights violations.”

“The Taliban has imposed many restrictions on women’s rights and media activities,” said Freshta Abbasi, an HRW researcher. “The Taliban has committed group torture in Panjshir province. These are all serious violations of human rights in Afghanistan.”

Women’s rights activists said an absolute majority of women have lost their jobs and girls have been barred from secondary schooling.

“Women have been removed from society in the last year and haven’t been given a role in political and social activities,” said Mohsina Saboor, a women’s rights activist in Kabul.

Secondary schools for girls are closed in Afghanistan over the last year. The Taliban has vowed to announce a new mechanism for the return of girls to secondary schools, but the group has not made any step on this so far.

Heather Barr, associate women’s rights director at Human Rights Watch, escribed the past year as an “absolute disaster” for human rights in Afghanistan.

During the past year, she said, Afghanistan has seen “extrajudicial killings, attacks on Hazara and Shia communities, a massive crackdown on media freedom… and the wholesale rollback of the rights of women and girls in every aspect of their lives.”

“We’re frustrated by what we see as an inadequate response from the international community to this very very serious crisis,” she said.

Moreover, the Taliban has suppressed women protestors whenever they have taken to Kabul streets, including in their latest protest this month.

Through its petition, Amnesty International has asked the Taliban to immediately end human rights violations in Afghanistan,
Grant women and girls their full spectrum of rights, guarantee Afghans’ rights to freedom of expression and freedom of association, and establish effective and transparent investigation and accountability mechanisms that delivers justice for human rights violations and war crimes.

But the Taliban said the group has ensured the rights of men and women in Afghanistan.

Spokesman Zabihullah Mujahid said in a tweet called the attempt by Amnesty International a propaganda, saying the rights of men and women have been ensured “many fold more than the last two decades.”