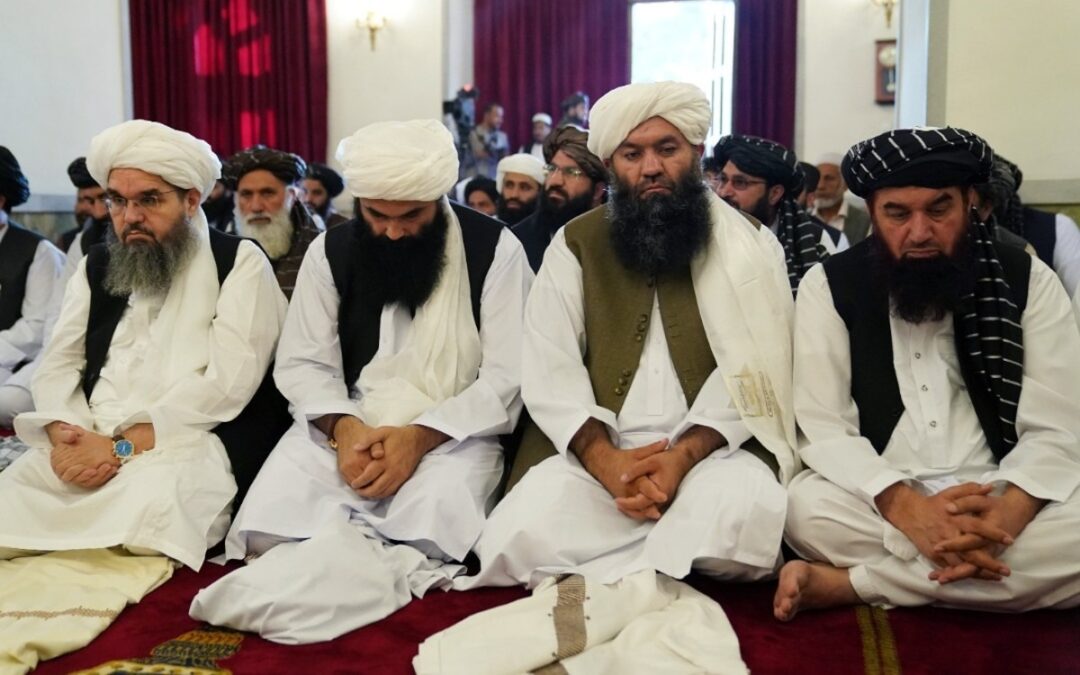 A number of Taliban leaders, including Sirajuddin Haqqani (second from left) attend Eid prayers in Kabul on July 9, 2022. Photo: Arg.

Eleven months after the Taliban’s return to power by toppling the republic government, the leadership of the group is facing intense rifts that have “increased recently” and have led to verbal and armed clashes between its fighters in various parts of the country, two sources aware of the matter said.

A source, who was a key member of the Taliban’s military commission for various provinces, told Amu TV that the rifts are “increasing” among the Taliban and that the group has changed into three clusters.

The second cluster, the source said, is led by Mullah Mohammad Yaqub, the interior minister of the group and son of the Taliban’s founder leader Mullah Omar. Individuals under this faction are those who have mostly attended fighting.

The third faction, the source said, is that of the Haqqani network, which is led by the Taliban’s defense minister Sirajuddin Haqqani.

“The rifts in Islamic emirate (Taliban) have increased. Everyone has set an assignment for themselves,” the source said. “The presence of the Haqqani network in the Islamic emirate has created many issues, and if this continues, the (Taliban) government will be separated and analyzed and we’re really concerned about this situation.”

Two incidents in a week

At least two incidents have happened this week that analysts say are the consequences of the Taliban leadership’s rifts on their lower ranks, especially in the central parts of Afghanistan.

Leaked audio from the Taliban’s former security chief for Panjshir, Hamid Khurasani, who is a Tajik commander, on Tuesday shows that three of his fighters have been arrested by Pashtun Taliban from Helmand for wearing the traditional hat of “pakol.”

In the 7-minute audio, Khurasani asks Taliban leaders, especially Mullah Yaqub and Haqqani to release his fighters from prison while criticizing the unjustified treatment in Taliban ranks.

He accused Taliban members from Helmand of killing civilians in Panjshir and of spreading ethnic rifts.

Earlier sources confirmed to Amu TV that more than 15 Tajik members of the Taliban have been arrested and tortured by Pashtun Taliban in Panjshir in the last month.

Meanwhile, in another incident, a clash happened between Taliban members from Kandahar and Tajik members of the group at a check post in the Gulbahar area in Parwan province on Monday evening, a source from the province said.

Analysts said that the Taliban is engaged in a serious struggle for power sharing and financial resources.

Afghanistan will enter another civil war if the Taliban does not prevent these fractures, especially those that have roots in ethnicity, said Tariq Farhadi, a political affairs analyst.

“The rifts among the Taliban are on resources. Afghanistan and Taliban will suffer big damage if this is not addressed,” he said.

Repeated trips of Mullah Baradar to Kandahar, the convention of the Taliban’s grand assembly in Kabul, the trips by Taliban leaders to northern parts of the country, especially Panjshir, and the arrest of non-Pashtun commanders of Taliban, including Tajiks, Uzbeks and Hazaras, are some instances that analysts hinted to them as “deep rifts” among Taliban leadership.

Reports by local media indicate that the Taliban have had internal clashes in Takhar, Panjshir, Kapisa, Parwan, Kunduz and Sar-e-Pul provinces.

Ismail Mashal, an Afghan analyst in political affairs, said that “deep rifts” have emerged between the Haqqani-led faction and the faction led by Mullah Baradar and the two clusters have had many verbal clashes at the presidential palace, the defense ministry and the interior ministry.

He added that the rifts will lead to a civil war in the country and that there is a need for an inclusive government in Afghanistan.

“Taliban is facing with deep rifts on reopening of (girls) schools, formation of an inclusive government, appointments in ministries and the share of ethnic groups in the government,” Mashal said. “In some cases, armed clashes happen among Taliban members.”

This comes as in a leaked audio message on July 11, Mullah Yaqoob said he is worried about rifts in Taliban ranks and expressed dissatisfaction regarding the removal of the Taliban flag in the Khost district of Baghlan province.