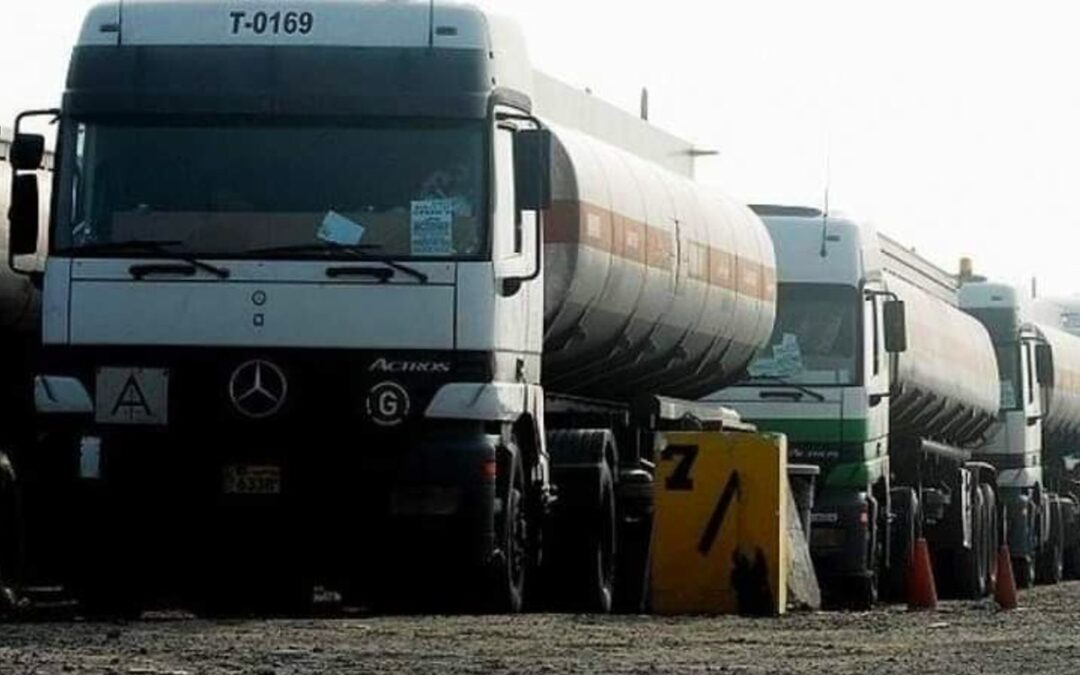 Tanker trucks waiting for their turn to enter Kabul from a southern gate on July 10, 2022. Photo: Amu

Fuel prices have soared rapidly in the last two weeks in Kabul and other parts of the country, resulting in a significant addition to the transportation costs in the capital city and making it difficult for the people to pay for their daily commutes.

The findings show that taxi fare for usual transportation inside the city has increased to 30 Afs (30 cents) per person while it was 20 Afs (20 cents) two weeks ago. The price for longer trips has been doubled, as passengers and drivers described. It means that people would have to pay 200 Afs ($2.2) for the same route they were paying 100 Afs ($1.1) a few weeks ago.

Taxi drivers in Kabul said they have added some amount to the fare as they have been left with no option but this.

“The fuel prices are high, but we are not charging people so high because what we earn does not afford our needs,” said Toryalai, a driver.

Kabul residents said they prefer to walk short distances instead of paying the travel cost because fuel prices have increased significantly. Many Kabul residents confirmed that they avoided visiting their friends and families during Eid days to prevent extra expenses due to the increase in taxi fares.

“Taxi fares have increased. For instance, the fare for one person in a five-passenger vehicle was 10 Afs (10 cents) per person, but now it has increased to 20 Afs (20 cents). We will have to walk when we don’t have money,” said Abdullah, a Kabul resident.

“The normal fare for traveling from the Froshgah area in downtown Kabul to Kart-e-Naw (in the east) was 20 Afs in the past, but it has increased to 30 Afs,” said Wasiullah Malikzai, a Kabul resident.

Analysts said that the increase in fuel prices, in the long run, will affect taxi drivers’ businesses who will lose their incomes and will think about changing their profession.

In a recent move, the Taliban government’s norm and standard office have imposed restrictions on imported diesel from Iran “for its low quality,” but the business community said the same quality of fuel is used in Iran as well as Central Asian countries.

The Chamber of Commerce and Investment said the restriction has caused a sudden increase in fuel prices in the country’s markets.

“They have increased our standards while the fuel that was previously imported is the same quality as the fuel which is used in Uzbekistan, Turkmenistan, Iran and even Russia, but it is not allowed to be imported to Afghanistan,” said Khan Jan Alokozai, head of the Chamber of Commerce and Investment.

The Taliban government has started an initiative to purchase at least 240 tons of diesel to inject it into the market and to make sure there is a 10 Afs (10 cents) decrease in prices of per liter of diesel, according to the Ministry of Industry and Commerce.

“We spoke with many channels in different countries to discuss the import of fuel… The Yama Petroleum Company showed its willingness to sell the fuel with a 10 Afs reduction in each liter to help our compatriots,” said Nooruddin Azizi, the acting minister of industry and commerce of Taliban.

Analysts said that the Taliban does not have a proper plan to control or reduce fuel prices in local markets and that plans to purchase fuel will not help in the prevention of hoarding of fuel prices.

“This is a big issue and it cannot be solved by supplying a limited amount of fuel to the market. It will not be controlled and meanwhile, it will create some type of uncertainty and this will push the private sector to implement secret plans. This move is not correct from an economic point of view,” said Sayed Massoud, an analyst.

Afghanistan imports its fuel from Iran, Uzbekistan, Turkmenistan and Russia. The country has five oil reservoirs but only one of them is extracted at a low level, which does not meet the needs of even one province.

Fuel prices increased globally last year after a rapid increase in demand which was followed by end of lockdowns in various cities around the world. The Ukraine war increased the pace of the rise in fuel prices globally.