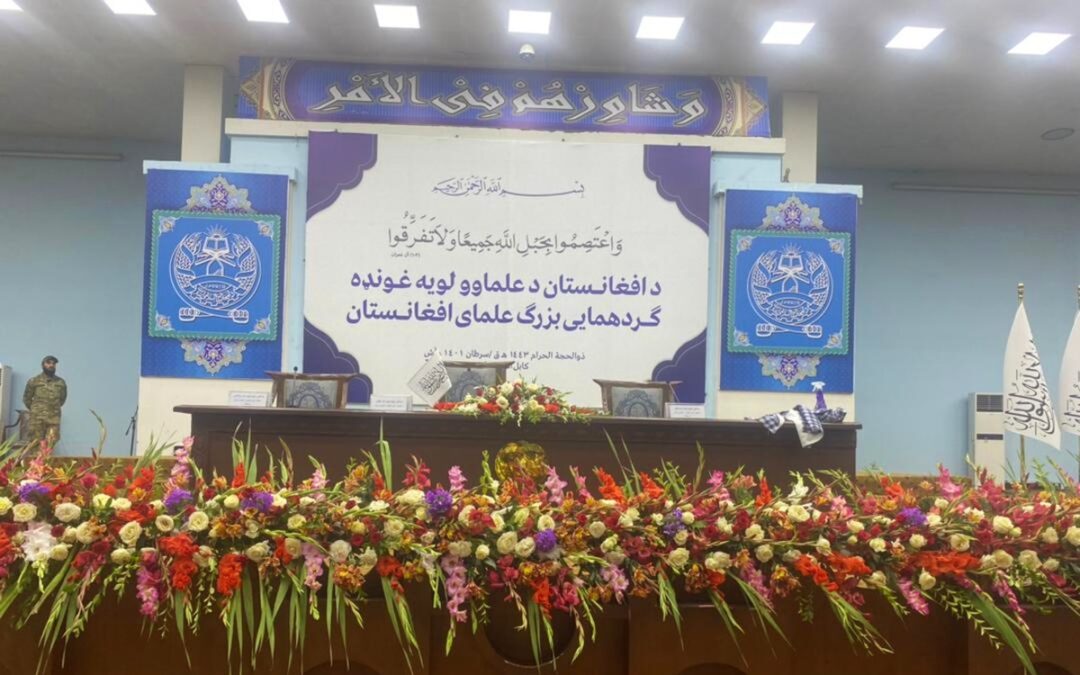 The Taliban’s so-called assembly of at least 3,000 religious scholars in Kabul came under serious questions by the people and analysts who called it one-sided, without an agenda for women and an attempt for strengthening the current regime instead of discussing bigger issues.

A much-debated point in the event was the presence of Taliban leader Mullah Hibatullah Akhundzada on the second day of the meeting, but he did not show his face, once again, and only audio versions of his and other speakers’ speeches were aired on the Taliban-controlled state-owned radio station.

Hibatullah made no mention of girls’ education and women’s rights during his speech but reiterated his call on the international community to recognize their regime.

Moreover, no woman, youth, or influential political figure was invited to the gathering that continued for three days and the participants released a resolution.

“The fact that Taliban leader did not appear (on TV) and avoided showing his face is not usual in a Muslim society. The Khadim Haramain Sharifain (the custodian of the Holy Mosques), Iran and Malaysia presidents and other Muslim countries are appearing (on media) every day and it is not restricted in the Shria,” said Azrakhsh Hafizi, an analyst.

Another analyst, Abdullah Sultani, said that even the clerics who attended the assembly could not see Hibatullah’s face.

“The one who is leading the country should show his face to the people,” Sultani said.

“People expect the Taliban to hold such sessions in presence of the media and provide information about it to the people,” Ehsan said.

The meeting did not pursue a specific agenda and no media outlet or journalist was allowed to cover the event.

Civil society activists said the event did not have national legitimacy because of the absence of women and youth.

“Women make half of society. They were not invited to the gathering. Youth and political figures were also absent from the meeting. This does not have legitimacy among the people,” said Nargis Mohmand, a civil society activist.

An international affairs analyst, Mahdi Afzali, said he questions the legitimacy of the assembly for three reasons: “The absence of the media, the unclear atmosphere of what happens inside, the nature of their invitees who all were from one party.”

“The meeting was among Taliban supporters who discussed their internal matters. In this session, one Talib gave legitimacy to another,” said Wali Frozan, an analyst.

Figures by the Taliban government show that at least 12,000 soldiers were deployed for the security of the Loya Jirga hall where the gathering was held.

Taliban spokesman Zabihullah Mujahid said that their government in Kabul had a role in selecting the participants and that the media was not allowed due to security reasons.

“We tried to provide a place for the media at the Hotel Inter-Continental in Kabul but the journalists who went to the area would have faced problems… (This decision was made) to avoid problems to the media,” said Mujahid.